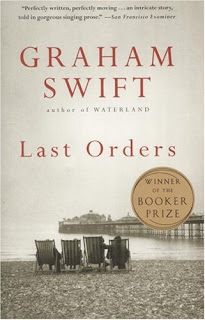 I finished Graham Swift's Last Orders the night before last and found it as moving as any novel I think I've ever read. It certainly more thoroughly reduced to me tears than any novel since I read Ian McEwan's Atonement in 2003, and while I know a novel's plucking effect on its reader's heartstrings is no measure of its greatness, per se, its having earned those tears (when it does) is.

My wife Kelly and I recently took a brief holiday (recovering from having spent yet another Christmas in the world of retail) -- four days and three nights at a little bed & breakfast in the mountains west of Missoula -- during which I thought it would suit me best to amble from book to book. And so I finished Libba Bray's Rebel Angels, started Lee Child's Killing Floor (which I've likewise since finished) and cranked out the first 60 pages of Last Orders in one sitting. Having read and admired (with some reserve) Swift's Waterland in 2005, I was prepared for his disinclination to sensual portraiture -- the identities of his characters are rooted in their dialogue, their thoughts, their environments and their situations, not at all in hair color, whether their skin is freckled, etc. And for a reader who loves sensual description of place and person as much as I do, Swift's habit of suggesting characters in lieu of painting them -- my friend Christian, lamenting this very thing in Waterland, once commented: "When I think of Mary, I think of her hole..." because Swift gives us little but her vagina with which to imagine her -- can be problematic (I actually take similar issue with Jane Austen's prose). But something about Last Orders hooked me from the outset.

There is such warmth in the Cockney voices shot through the novel that it feels burnished, like wood polished to a glow. Unlike certain other novels written in dialect (Zora Neale Hurston's Their Eyes Were Watching God comes to mind), it never alienates. And the shuttling back and forth between perspectives in the book -- from Ray to Vince to Amy to Lenny to Ray, etc -- allows Swift to exercise tremendous patience and precision in connecting dots, in braiding these lives one to another. In the end, each character's decisions echo -- and move us -- because we've been given such a profound sense of context. Such a dense knitting together of these lives might seem a contrivance -- indeed, it does to some (including my friend Sarah, who hated the book for what she calls its phoniness) -- and leveled criticisms along those lines would be valid, I think, in part because the book is such a tangle of histories. But, again, because the novel's voices feel so broken-in and lived -- as though Swift has not written them so much as recorded them -- and because I've experienced (with the men with whom I've been friends between 16 and 28 years) something like the calibre of masculine friendship seen here and have lived (not unlike Jack Dodds) in perfect willful and shameful ignorance of a disabled relative who would, I'm sure, have liked (when I lived unbelievably in the same town) to see me and have been seen by me more than once every two years or so, it all just rings true.

Perhaps the highest compliment I can make to Last Orders is that I felt, in the end, as though I'd been, throughout the book, the fifth man in the car on the drive to Margate to spread Jack's ashes in the sea.

Its shortlist competition in 1996 (those I've read in italics): Margaret Atwood's Alias Grace, Beryl Bainbridge's Every Man for Himself, Seamus Deane's Reading in the Dark, Shena Mackay's The Orchard on Fire, Rohinton Mistry's A Fine Balance

Reading: 1st
A deserving winner
Posted by Jason Cooper at 7:20 AM