Since my last blog post, so much has happened that I could write about, I'm not too sure what I should write about. But let me focus on one of the angles meant to be the heart of this blog: the arts and their intersection with our lives. 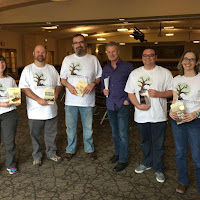 A couple years back, I blogged about a barbecue my fellow book club members and I shared (most of them traveling long distances for it), in which I speculated on what we -- The Eclectic Shade Tree -- might do for our 15th anniversary in 2017. Well, we're in the midst of that anniversary now, and although we didn't meet up on a cruise ship somewhere off the coast of Eastern Canada, we did convene in Laramie, Wyoming, this last spring, for the UW Libraries Foundation event at which Timothy Egan spoke about his most recent book, The Immortal Irishman: The Irish Revolutionary Who Became an American Hero. Paul and Dylan drove from Cheyenne, Christian (with his girlfriend) and Amy (without her boyfriend) flew from Washington. Each of us read one of his books in advance; we talked book club business over lunch at the Pita Pit; we raced to our hotels to change into our official book club shirts (geeks that we are) and met up again at the post-lunch panel; four of us spent the late afternoon browsing Laramie's Second Story Books and Night Heron Books; the lot of us shared a table at the gala dinner that night, where Egan spoke again -- this time about his creative process.

It was a lovely ten hours spent with cherished people my wife Kelly and I don't often get to see face-to-face, in the company of my in-laws, talking about books in the presence of a writer we all admire and who was deeply gracious with us.

I think of this day as the last joyous occasion before what would turn out to be an arduous four-month journey. Our youngest cat, Harry, fell into a series of urinary obstructions a week or so later, was diagnosed with Feline Lower Urinary Tract Disease, underwent a perineal urethrostomy at the Colorado State University Veterinary Teaching Hospital, and suffered with as much love and good humor as he could muster through puzzling complications and treatment failures before we finally decided to have him put to sleep in late August.

It was the most difficult decision Kelly and I have ever made, together or apart. He was just three years old.

In the days following his death, we started keeping a journal of memories of our favorite things about 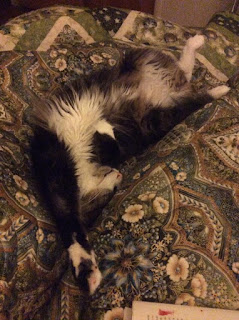 him: the way he would sleep sprawled out on his back, his saucer eyes, his love of a particular length of green ribbon. One of the things Harry loved best in life was to listen to me read aloud. It would often bring him to bed at night -- the sound of my voice reading from James Galvin's The Meadow. Books have helped me survive the crisis of his illness; and books helped him weather that storm for as long as he did, too. Kelly, who has suffered, I suspect, more than even me through his illness and passing, has been reading EB White's Stuart Little. The first book I began and finished in the wake of his death was Kenneth Grahame's The Wind in the Willows. I had never read it before. And I remember Harry as a perfect manifestation of Mole and Toad: gentle and guileless on the one hand, mischievous and spirited on the other.

He was a charmer, a jewel, a home.

Much has been made about how reading literature increases empathy in us, nourishes and expands our neural pathways, makes us better citizens of our world. All true, to be sure -- but it also works to make us whole again, if we let it. And when we find ourselves spinning in a chaos of anguish -- be it from the death of a friend or family member, the loss of a job, the haze of chronic illness, or the hushed euthanasia of a pet as dear as a child to its parents -- it's important that we remember that books are there for us, less as solutions to our problems than as panoramas of healing through which we might walk. Books comfort. Some books comfort.

The Wind in the Willows is one.