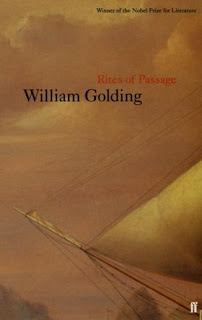 I finished William Golding's Rites of Passage late last week and have to admit mild disappointment with it. I'd never read him before -- not even Lord of the Flies (I know, I know) -- but thought: a Booker Prize and the Nobel Prize for Literature must bode well, right? And I've always had a keen interest in seafaring tales, so where could it have gone wrong?

The novel is the journal of Edmund Talbot, written as a gift to his godfather (that the latter might live a vicariously youthful life) and meant to be a document of the comings and goings aboard the vessel. Golding, for his part, succeeds in the voice of the novel -- it feels authentic to the literature and correspondences of the Regency period -- but in too little else. One would think that the sea would fan the flames of an author's powers of description, but there was very little prose in Rites of Passage noteworthy for either its observational precision or its striking beauties. One exception would be a passage early on in which the sailors -- on deck, in their oilskins, during a mighty gale -- "resemble nothing so much as rocks with the tide washing over them." I felt, with this passage, that I saw precisely what Golding intended me to see, that he was -- in that moment -- the captain of a narrative ship capable of inspiring envy in other writers and gratitude in careful readers. But the book almost never sees such piercing and lovely descriptions again. Still, though I'm a reader who loves language above even character and the spinning of the yarn, I've learned to recognize, over the years, that a fine novel needn't luxuriate in alliterative language or flights of metaphor to be a fine novel. In short, not every writer has the poetic sensibility of Sebastian Barry or Peter Carey or Iris Murdoch. Two of my very favorite novelists -- Rohinton Mistry and Sarah Waters -- mine their genius (and genius it is) elsewhere: in depth of character, or startling empathies, or byzantine plotting, or sensitivities to period and politics, or experiments in perspective. In their cases, the prose serves ends more foundational than itself -- the brilliance is in the bricks. And while this was nearly the case with Rites of Passage -- Golding's tweaking of perspectives (giving us, in the journal, Talbot's view of Colley and then, in the letter, Colley's view of Talbot's behavior towards Colley) deepens the pathos manyfold and makes characters of caricatures (until we're allowed his voice, Colley seems like a thin unflattering riff on Austen's Reverend Collins in Pride and Prejudice) -- the book has too much going against it (e.g. a too-awkward mishmash of horror and humor, a narrator it seems Golding wants us to like despite his giving us little or no good reason to) for it to sing as a Booker Prize-winner should.

I liked Rites of Passage well enough, but shouldn't the novel that saunters off with the most prestigious literary prize in England be liked better than well enough?