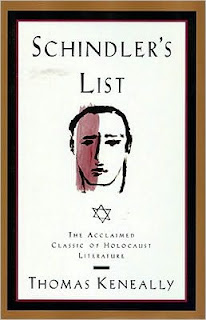 First, let me express puzzlement that Schindler's List was claimed, marketed, received and won prizes as a novel. It's a fine book, if sometimes a bit awkwardly written (the occasional too-abrupt, and so initially confusing, transition or digression), but it doesn't read like a novel, in large part because it doesn't bring to bear "the texture and devices" of fiction that Keneally, in the introduction, claims it does. I find it telling that since publishing Schindler's List, and despite continuing to publish proper novels (e.g. Office of Innocence), Keneally is these days more commonly regarded as a writer of non-fiction, having written biographies of Abraham Lincoln and Daniel Sickles, as well as two books on the origins of Australia, a book of Irish history, etc -- telling because Schindler's List is more a work of Holocaust Studies than a work of fiction (as such, the book that seemed to have set him on the path of writing non-fiction more often than fiction), however its dust jacket would have us situate it in its author's canon.
But to the book itself...
Having seen Spielberg's film upwards of a dozen or so times (including five times in the cinema), I felt very familiar with the story. That is, until I realized how unfamiliar with the story I actually was. In the understandable interest of cinematic expedience, a number of the personalities and events in Keneally's novel are conflated, or excised altogether, in Spielberg's film -- making reading the book an awakening. Certain of the details or developments new to me left me plumb thunderstruck, including the scene early on when the Nazi officers herd the Orthodox Jews and the Jewish gangster Max Redlicht into "the oldest of all Polish synagogues," forcing them to spit on the Torah scrolls before murdering them all regardless. What struck me most about this scene, and others in the book, was its depth of the tragic, was the way in which we seem encouraged to regard Redlicht's refusal to desecrate the scrolls as an act of heroism (which it is) only to realize a moment later how much more pressing it is that we regard these Jewish men being put in such a situation at gunpoint in the first place as a horror capable of relegating Redlicht's heroism to footnote status. The dawning of this larger, more complex, more poignant reading of the situation felt, to me, cut from the same cloth as Oscar's epiphany -- in the wake of having seen the Aktion in which the red girl wanders amidst carnage -- that the Nazis were permitting witnesses because the plan was to extinguish the witnesses, too. Keneally is quite good at pulling back veils of narrative, one at a time, so that the purview of atrocities so vast as to inure us instead startle us, despite the newsreels we've seen over the years or the accounts we've read. In other words, the way in which he has written the book somehow makes the Holocaust feel more like breaking news than old news -- which is precisely how a narrative like this should read. Twice, while reading the book in a cafe, I had to set it aside, so close was I to bursting into tears in full view of latte drinkers and cheesecake snackers. I wasn't expecting the book to leave me feeling bruised (again, given that I'd seen the film so many times over the years and as recently as three or four months earlier), but it did. Its power to shock, its insistence on (even inexplicable) light within the dark, its precise construction achieving theatrical effects in service of truth rather than artifice, its phrasing sometimes disarming me with its gift for framing (and so making comprehensible) that which had defied comprehension (I'm thinking particularly of Stern comparing Belzec and its manufacturing of death to Henry Ford's assembly line production of cars) -- for all of these reasons, it is a book that one hopes will always survive.