Earlier this month, members of my book club, The Eclectic Shade Tree, converged on Casper for a barbecue and discussion of Halldor Laxness's Independent People and Charles Ferdinand Ramuz's Beauty on Earth. As we're an online book club, our members have always been far-flung (there was once a time where we had members on three different continents), making it difficult for more than a few to get together for a meal, drinks, a chat. But a few weeks ago saw Paul spend five hours round-trip on his motorcycle to join me and Dylan and Tim here in Casper, Amy driving four hours round-trip, Keonna four hours round-trip, and Christian flying to Denver and then driving nine hours round-trip -- all for books, camaraderie, and conversation. A number of these people were meeting each other in person for the first time. Hanz -- who had moved to Wisconsin from Casper just a week earlier -- was the lone absentee. So close! But we had a beautiful, animated afternoon, eating burgers and brats, yammering about the glories of Laxness's vision of nature and the shortcomings of Ramuz's modernist minimalism. In fact, the afternoon came off so thoroughly without a hitch, that I proposed the idea that we celebrate the EST's fifteenth anniversary -- in 2017 -- with the lot of us taking a cruise together. Perhaps a trip to Alaska whilst reading Andrea Barrett's Ship Fever, or a journey to the Caribbean with Jean Rhys's Wide Sargasso Sea, or a voyage along the New England coast with Margaret Elphinstone's Voyageurs... 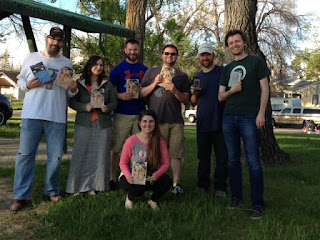 Will it happen? I hope so; I believe so. Logistics are knotty, but with enough time to plan and save, knots can be undone. There are few things in life so marvelous as books. Sharing books with others, and seeing those others become dear to you over time, is more marvelous still. And throwing a holiday into the mix -- excursions, the rolling sea, long walks along the decks, dinners and desserts -- seems a recipe for memories that'll stand a long, long time. I love this book club and am proud of its having withstood and adapted to change over the years, having survived Tolkien's The Silmarillion and Pessoa's The Book of Disquiet. It has been a source of comfort and steadiness in my life since 2002, has given me some of the best novels I've ever read, has drawn the stitches of certain friendships tighter and saw the beginning of the relationship that would become my marriage during a dinner to discuss Isabel Allende's The House of the Spirits.

So cheers to the EST, to the warm ironwork of friendship and the splendor of literature.