Ever since his passing last week, I've been wanting to write something about E.L. Doctorow. Not a commemoration of his life or appreciation of his career, but rather a commentary on how heartening I have found the depth of warmth and precision of memories in those tributes to him written by others. Great writers are rarely paid due attention, and while it's unfortunate that their deaths precede such attention more often than does their work, we should be grateful when we see writers of Doctorow's caliber trending on social media. 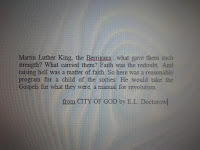 Ours is an impoverished culture -- enamored of buffoonery, accepting of chicanery -- and books like Ragtime (which I haven't read) and City of God (which I have) are beacons or compass points in line with which our culture might be righted. Novelist and essayist Marilynne Robinson has written that "civilization can trivialize itself to death," and I believe she is correct. So much of the art we imbibe, the gossip we condone, the lip service we pay the ridiculous has a poisoning effect on who we are and what we expect of our lives in that it elbows the truly valuable to the margins, uses its bombast to make footnotes of discretion, wisdom and beauty. So to have seen the wealth of coverage on, the column inches devoted to Doctorow's legacy -- especially given how minor key the discussion of his work always seemed to be during his life, however many prizes he bagged -- has consumed me this last week. City of God (the one novel of his I've read) is a favorite of mine -- a lightning strike of a book, an engine roaring forward on intellect and risk -- and while I've long suspected that The Book of Daniel and The March, for example, must be at least as accomplished, I've never once had a discussion of his work with a friend, a professor, a book club member. So to read that Michael Chabon regards Doctorow's work as the quickening impetus behind his own oeuvre, that he still remembers the buzzing dinner conversations his parents had about Ragtime four decades ago -- leaves me a little awestruck at what awaits me in that book. And to read that Amy Bloom considers Doctorow the finest American novelist of the last century (remembering, of course, that that century also included the likes of Steinbeck and Faulkner, to say nothing of contemporaries like Cormac McCarthy and Philip Roth) -- this is praise that would seem like hyperbole if it didn't, instead, hum with sincerity and humility. Or to hear Ta-Nehisi Coates speak about reading Ragtime: "from the first page, you know, my head almost exploded." Or to read Doctorow's obituary in The New York Times and to then spend 30 minutes with the comments on it -- from his readers, his peers, his former students. I can't ever remember reading such a number of lucid, loving, indebted memories of encounters with a writer and/or his work on the occasion of his passing. And it is this abundance of treasuring up this masterful writer's life, gentleness and blazing body of work on which I wanted to comment.

We've lost a genius. But this loss seems also to have reminded us that complex art, rigorous thought and delicacy of carriage are more important to us than perhaps we'd realized. May we carry that epiphany forward and let it inform what we read, how we treat others, and how we treat ourselves.