What Religion Is and Is Not 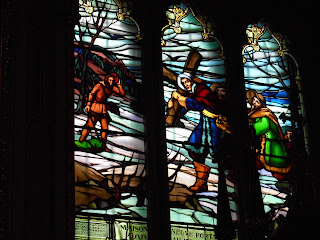 A dear friend of mine -- an atheist -- asked me recently: if certain passages in the Bible are contentious, are used as platforms to substantiate bigoted worldviews or even acts of violence, might Christians not treat the Bible, then, as a living document, open to revision, excision, the paring away of behavioral codes incompatible with life as it is in 2016? It’s a good question, and it arose from a brief, itself contentious exchange we had on Facebook about a post from atheist philosopher and scientist Sam Harris, in which Harris attempted to explain what atheism is and what it is not. My friend’s question led me to the conclusion that his question cannot be addressed, let alone answered, without considering what Christianity is and what it is not -- at least, as I see it. (That qualifying phrase -- “as I see it” -- might be where a number of atheists get tripped up in considering or defining religion. Their philosophical position is, by nature, fixed: an absence of belief in a god. Whereas the religion to which I belong is malleably defined at best: it resists being pinned down, which is, on one hand, a virtue, placing it less on a footing with the cold, glassy symmetries of mathematics than with the roiling, whispered sleights of poetry; and on the other hand, a pointed disadvantage, because we rightly privilege logic, answers, progress forward built on the scaffolding of certainties.) So, then, in as concise a way as I know how to put it: Christianity is, to me, the life and example of Christ. And the life and example of Christ is an answer, or utterance in response, to the world (and its attendant codes and cruelties) that preceded it. And we should not strike from the Bible those contentious passages because those passages represent what the world was prior to Christ and what it will persist in being and becoming in lieu of Christ. The books of the Old Testament are, first and foremost, an embroidered history of a people -- and we take, and should take, such histories with their blights intact. Just as we would whitewash the Western historical record of recent centuries to our detriment -- how much easier would it be to repeat the sins of the past (be it industrial genocide or the commerce of slavery) without insisting on, and learning from, their having transpired? We cannot strike passages condoning the stoning of people to death from the Bible, because to do so robs the teachings of Christ in Matthew 5:38-39 and the example of Christ in John 8:1-11 of their revolutionary vision. We cannot strike passages that seem to indict homosexuality because to do so would discourage the discipline of close reading for meaning and the discipline of looking beyond the Bible itself for cultural context: the account in Genesis 19 of the destruction of Sodom and Gomorrah is not a judgment on homosexuality, but on rape (countless people get this wrong, true, but without the text before them, those people will never have a chance to get it right); and what seem to be Paul’s judgments on homosexuality (as we understand it in the 21st century) are revealed to be judgments on the sexual enslavement of adolescent and prepubescent boys when one takes the time to follow in the footsteps of the scholars (e.g. Sarah Ruden) who’ve done the legwork. We need the contentious passages to remind us of whom our ancestors were and to -- in some cases -- remind us who we must never again be. That some people don’t understand this is unfortunate; but the people who use religious texts as blunt instruments to persecute and abuse others (the Kim Davises of the world) are never going to have the epiphanies waiting for them (on homosexuality, on capital punishment, et cetera) if atheists and thoughtful Christians continue to let those people position themselves as the faces and voices of modern Christianity. I’d wager that most contemporary pharisaical believers have met Christ -- but still do not see Christ. And in failing to recognize Christ as the final, radical, liberating word on how human beings must conduct themselves, fail to see the Church and their own lives as manifestations and extensions of His. And that is tragic. Because when we do recognize Christ, our lives and the communities we build and the relationships we nurture become those very edits my friend was wondering why we, as believers, don’t make to the actual biblical text itself. In short, Christians whose sense of their religion is rich with contextual awareness, intellectual rigor and deep focus on Christ as the cornerstone of the whole enterprise -- these Christians do, indeed, regard and present the Bible as a living, changing, growing document. It is not static; it is not calcified; it is not a command that we conceive of our modern world along premodern lines. The Bible is an historical portrait in which Christ sits, from which Christ emerges. It is both a long shadow cast and a transfiguring light revealing not answers so much as the value in asking questions. And perhaps this is part of the rub, too, for atheists: that religion doesn’t provide answers in the way that science does or in the way that misguided believers assert that it does. Christianity, at its best and most vibrant, understands that conclusions take a back seat to wonder, possibility and the ceaseless crafting of self, climate and culture. And when the world (including the atheists whose hackles go up over the Christians out there pounding the drum against LGBT rights, citing what they imagine to be scriptural precedent) finally sees that people like poet Christian Wiman, novelist and essayist Marilynne Robinson, activist John Dear and preacher Frederick Buechner are the contemporary faces and voices of actual Christianity -- not spotlight-addicts like Kim Davis, not bigots like the late Fred Phelps, not people whose faith hinges on Creationism -- the better off we’ll all be.