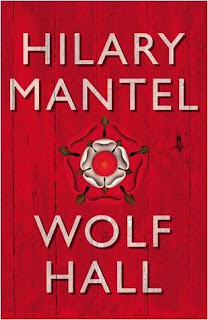 Having finished Wolf Hall a week or so ago, I thought it was high time to post -- lest memories of the book grow dim. Not, of course, that I see there being much chance of that: Mantel's novel reads like a smoking orange brand on one's imagination.

There has been much fuss from the book's admirers and detractors in the British press about British familiarities with the corners of the Tudor histories it relates -- on the one hand, critics argue that Mantel breathes vibrant and re-considered life into a past grown threadbare with yawning overhandling in grammar school lessons (or, as John Mullan has noted, that she has "unstitched" that past), whereas on the other, critics accuse her of copping out in telling a tale so often told, of cheating readers of encounters with the unknown. All of which brings me to what was, perhaps, the greatest thrill for me in reading Wolf Hall: that I know almost nothing of the historical record from which Mantel has written. Growing up in southeastern Wyoming, one's grade school histories are those of the Oregon Trail, trading posts, bison massacres and Wild West shows. I, of course, went into Mantel's splendid imagining of Henry VIII's court knowing a fair bit about Elizabethan England (from the numerous Shakespeare biographies I'd read and documentaries I'd seen), but next to nothing about the the political landscape that preceded, and gave rise to, it. Sure, I knew something about the dubious origins of the Church of England (belonging, as I do, to the Episcopal Church, its American counterpart), but had neither heard nor read the name "Thomas Cromwell" (the main character in Wolf Hall, and architect of the marriage between Henry VIII and Anne Boleyn, through whose all-seeing vision and intuition Mantel imagines this world -- indeed, her appropriation of his perspective proves to be an act of ventriloquism every bit as convincing and enchanting, in its way, as Peter Carey's assumption of Ned Kelly's voice in his 2001 Booker Prize-winning True History of the Kelly Gang) before reviews of the novel began appearing in the Spring. I turned page after page, discovering (most of) its cast of characters and their tangles of relationships for the first time and couldn't have been -- as a result -- more transported than I was.

From the outset, the prose is all one would hope it to be in a Booker Prize-winning novel. Whether relating the beating a teenage Cromwell takes from his father in the opening pages -- "Come on, boy, get up. Let's see you get up. By the blood of creeping Christ, stand on your feet." -- or, later, describing "[a] wash of sunlight [...] over [a] river, pale as the flesh of a lemon," Mantel's ear is perfect. (I read one sentence that made me wince with its tinniness, its rattle -- one in a book of 650 pages.) But the moment I knew that Wolf Hall was something rare and overwhelming came during the scene in which Cromwell's daughters succumb to the plague: the prose in those two pages is so gorgeous, and Mantel's empathies so profound, I was reminded of nothing so much as the Gospels and the masterpiece that secured Sigrid Undset the Nobel Prize for Literature (and a candidate for the best novel I've ever read), Kristin Lavransdatter (in, it must be stressed, the Tiina Nunnally translation).

And how unexpected that a British novel -- from an agnostic's pen and published in 2009 -- should consider religion with the gravitas it deserves (modern and postmodern British novelists tending so often to treat religion as a subject for dismissive ridicule and contempt, as the butt of some humanist joke making the rounds among the intelligentsia)? It is cause for celebration. As is this novel -- for all it attempts and all it accomplishes.