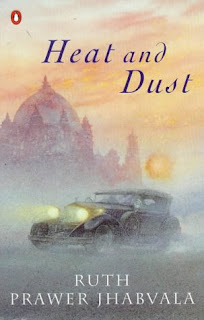 I first read Heat and Dust almost 15 years ago and have just finished re-reading it for this blog project. Despite having earlier read it, and having seen the film based on it, I couldn't have told you -- going into the re-read -- what it was about, so slight was its impression on me in my early 20s. And now I find I dislike the book for largely different reasons altogether!

Ruth Prawer Jhabvala is best known as the screenwriter of most of the much-lauded Merchant-Ivory films (the best known of which are The Remains of the Day and Howards End). Indeed, she is among the greatest living screenwriters. (There has been much dragging of Merchant-Ivory Productions through the dirt in the last decade, as tastes in cinema have changed, but I'll have no truck with it; I've been an enormous fan of their work, Heat and Dust and a few others notwithstanding, for a long time.) But as a novelist -- in conceiving an original narrative (her glorious scripts have notably been adaptations) -- her narrative gifts sometimes lack conscientious underpinning. Her scenes are often quite moving (e.g. the narrator and Maji remaining with Leelavati, the beggar woman, over the hours of her dying) and her prose is elegant and clean -- and sometimes quite beautiful (e.g. "She stuck out her hand to see if the rain had started. It had, but so softly that it was both invisible and inaudible, and everything -- the garden pavilions, the pearl-grey walls, the mosque -- seemed to be dissolving of its own accord like sugar in water.") -- but the book has no serious commitment to its serious ideas. Its characters have no, or little, moral definition, and so we have no, or little, sense of their motives.

Adulteries loom large in Heat and Dust, but Jhabvala seems to regard them less as matters of consequence or ethical puzzles than as feminist opportunities meant to be seized and rejoiced in. Flannery O'Connor (a novelist whose sense of the distinction between that which is moral, and so necessary, and that which is moralizing, and so to be shunned, was as keen as those senses come) once wrote: "It is one thing for a [person] to read about adultery in the Bible or in Anna Karenina, and quite another for him to read about it in most modern fiction. This is [in part] because in both the former instances adultery is considered a sin, and in the latter, at most, an inconvenience." A novel addressing adulteries should never resort to preachiness, but neither should it cavalierly ignore the power of adulteries to reduce lives to rubble. In short, a novel that confronts such freighted themes (irrespective of whether it recognizes sin in the actions of its characters) must concede that such themes demand grave attention, and it is in this respect that Heat and Dust (which treats both extramarital affairs and the decision to have an abortion as casual stepping stones on the road to discovering oneself) falls precipitously short of masterpieces including Bronte's Jane Eyre, Greene's The End of the Affair and Kundera's The Unbearable Lightness of Being (all novels concerned with duplicities in matters both emotional and sexual, and all novels that treat the subject with appropriate moment -- one might acknowledge Josephine Hart's Damage here, too, the title saying it all).

I don't want the novels I read in squeaking-clean, Pleasantvillean denial of the hurt we do one another, but I do want them to acknowledge those hurts as hurts. Heat and Dust, whatever its merits and apart from Olivia and the Nawab being so damn unlikable (she for her naivete, he for his selfishness and his belief that certain others deserve his contempt, both for their lack of concern for those in their circles), gives us characters who disregard their sin and seems to celebrate that disregard. Jhabvala's (correct) critique of proposed moral justification for the British imperial presence in India -- at one point the Nawab tells Olivia that the British "make themselves into judges over others, saying this is good, this bad, as if they are all-knowing," while at another point we learn that Dr. Saunders (representing the British Empire and thinking it his prerogative to strike the Indian women who come to his clinic with complications from their abortions) has "strong ideas about morality and how to uphold it" -- swings too far in the opposite direction and becomes an unfortunate championing of moral relativism, permitting her moments in which, for instance, we're encouraged to see nothing amiss or strange about a woman who is sleeping with a married man telling that man that he is a good husband to his wife (!), or in which the narrator initially consents ("out of curiosity" -- as one might order an exotic new condiment on one's hamburger) to a massage intended to bring about a miscarriage of her child.